This is an abbreviated version!
For detailed information about homoisocitrate dehydrogenase, go to the full flat file. 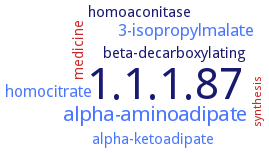 1.1 Acting on the CH-OH group of donors

show all columns Go to General Information Search
Please wait a moment until the data is sorted. This message will disappear when the data is sorted.
evolution
Saccharomyces cerevisiae
-
the enzyme is a member of the family of pyridine dinucleotide-dependent beta-hydroxyacid oxidative decarboxylating dehydrogenases, specifically the family that has (R)-beta-hydroxyacid substrates, including isocitrate dehydrogenase (ICDH) among others. Superposition of available structures of the malic enzyme, isopropylmalate dehydrogenase, IcDH, and HIcDH show a similar overall geometry of residues in the substrate and metal ion binding sites. A Lys (general base)-Tyr (general acid) pair is conserved among these enzymes. The similar structural geometry in the active site suggests a similar general chemical mechanism. Three aspartate residues are conserved in the active sites of all HIcDHs sequenced to data, and are also conserved across the family of pyridine nucleotide-dependent oxidative decarboxylases including malic enzyme
739958
metabolism

Candida albicans
-
three-dimensional structure and homology modeling, overview
722303
additional information
Saccharomyces cerevisiae
-
a conformational change to close the active site and organize the active site for catalysis contributes to rate limitation of the overall reaction of the Saccharomyces cerevisiae enzyme HIcDH. Residues K206 and Y150 of ScHIcDH are a Lys-Tyr pair in the active site acting as the general base and general acid in the reaction. A slow conformational change is required to close the site upon the binding of MgHIc prior to catalysis. With the slow substrate isocitrate, hydride transfer and decarboxylation steps contribute to rate limitation, and the decarboxylation step is the slower of the two
739958
additional information
Candida albicans ATCC 10231
-
three-dimensional structure and homology modeling, overview
-