This is an abbreviated version!
For detailed information about hydroxymethylglutaryl-CoA reductase, go to the full flat file. 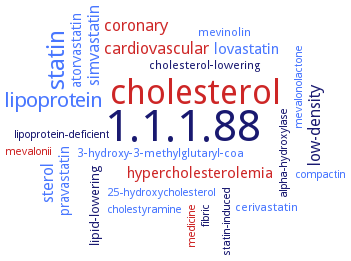 1.1 Acting on the CH-OH group of donors

Go to Expression Search
Please wait a moment until the data is sorted. This message will disappear when the data is sorted.
during myoblast differentiation, insulin-induced increase in protein levels is detected after 6 h, remains constant up to 16 h, and then decreases below control levels at 72 h after insulin addition
Rattus norvegicus
-
712560
mRNA levels of HMG-CoA-R are increased significantly in both primary and recurrent pterygia by 4.2fold and 3.6fold respectively, compared with normal conjunctiva. Concomitantly, there is a significant increase of LDL-R mRNA levels of 4.1fold in primary pterygia and 2.7fold in recurrent pterygium, compared with the control normal conjunctiva
Homo sapiens
-
712196