This is an abbreviated version!
For detailed information about 2-hydroxybiphenyl 3-monooxygenase, go to the full flat file. 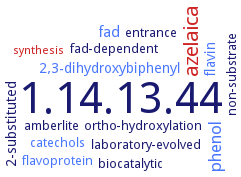 Go to Crystallization (commentary) Search
Please wait a moment until the data is sorted. This message will disappear when the data is sorted.
hanging drop method, structure of the enzyme with bound 2-hydroxybiphenyl, as well as several variants, at a resolution of 2.3-2.5 A to investigate structure function correlations of the enzyme. An observed hydrogen bond between 2-hydroxybiphenyl and His48 in the active site confirms the role of this residue in substrate deprotonation. The entrance to the active site is confirmed by generating variant G255F which exhibits only 7% of the wild-type's specific activity of product formation, suggesting inhibition of substrate entrance into the active site by the large aromatic residue. Residue Arg242 is suggested to facilitate FAD movement and reduction as was previously reported in studies on the homologous protein para-hydroxybenzoate hydroxylase. In addition, it is suggested that Trp225,which is located in the active site, facilitates proper substrate entrance into the binding pocket in contrast to aklavinone-11-hydroxylase and para-hydroxybenzoate hydroxylase in which a residue at a similar position is responsible for substrate deprotonation. Structure function correlations described in this work will aid in the design of variants with improved activity and altered selectivity for potential industrial applications
Pseudomonas nitroreducens
O06647
744407
hanging-drop vapour-diffusion, optimized precipitant solution contains 1.6 M ammonium sulfate, 100 mM sodium chloride and 100 mM MES-NaOH, pH 7.5, crystals of native and SeMet-HbpA diffract to 2.01 and 2.25 A, respectively
Pseudomonas nitroreducens
-
657455
single crystals of the enzyme are used to determine its structure in two forms: an FAD-bound form that allows characterisation of the active site, and an apo form that, although lacking flavin, gives extra information on the location of residues and structure of mobile loops that are absent from the FAD complex
Pseudomonas nitroreducens
O06647
744702