This is an abbreviated version!
For detailed information about respiratory dimethylsulfoxide reductase, go to the full flat file. 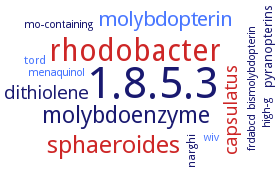 1.8 Acting on a sulfur group of donors

1.8.5 With a quinone or similar compound as acceptor

molybdenum cofactor
Rhodobacter capsulatus
-
residue W116 forms a hydrogen bond with a single oxo ligand bound to the molybdenum ion. Mutation of this residue to phenylalanine affects the UV/visible spectrum of the purified MoVI form of dimethylsulfoxide reductase resulting in the loss of the characteristic transition at 720 nm. W116 plays a critical role in stabilizing the hexacoordinate monooxo MoVI form of the enzyme and prevents the formation of a dioxo pentacoordinate MoVI species
712000

[4Fe-4S]-center
Escherichia coli
P18775
role for the cluster in directing molybdenum cofactor assembly during enzyme maturation. The cluster is predicted to be in close proximity to the molybdo-bis(pyranopterin guanine dinucleotide) cofactor, which provides the site of dimethyl sulfoxide reduction
725419

Luteovulum sphaeroides
-
presence of a monooxo molybdenum cofactor containing two molybdopterin guanine dinucleotides that asymmetrically coordinate the molybdenum through their dithiolene groups. One of the pterins exhibits different coordination modes to the molybdenum between the oxidized and reduced states, whereas the side chain oxygen of Ser147 coordinates the metal in both states
713506

Escherichia coli
-
residues Pro80, Ser81, Cys102, and Tyr104 of electron transfer subunit DmsB are located at the DmsB-DmsC interface and are critical for the transfer of electrons from MQH2 to iron-sulfur cluster FS4
711196

synthetic construct
-
reaction profile for oxygen atom transfer from dimethylsulfoxide to [Mo(IV)(OMe)(S2C2H2)2]1- compared to the corresponding reaction with [W(IV)(OMe)(S2C2H2)2]1-. Both reaction profiles involve two transition states separated by a well-defined intermediate. The second transition state TS2 is clearly rate-limiting for the Mo system, and the two transition states have a similar energy for the W system. The activation energy for oxygen atom transfer from dimethylsulfoxide to [W(IV)(OMe)(S2C2H2)2]1- is ca. 23 kJ per mol lower for the corresponding reaction with Mo, consistent with the significantly faster rate of reduction of dimethylsulfoxide by Rhodobacter capsulatus W-dimethylsulfoxide reductase than by its Mo counterpart. The geometrical constraints imposed by the protein on the metal centre of the Mo- and W-dimethylsulfoxide reductases facilitate oxygen atom transfer by favouring a trigonal prismatic geometry for the transition state TS2 that is close to that observed for the metal in the oxidised form of each of these enzymes. The major effect of different tautomers of a simplified form of the pyran ring-opened, dihydropterin state, a significant lowering of the activation barrier associated with TS2, is observed for a protonated form of a tautomer that involves conjugation between the pyrazine and metallodithiolene rings
711815