This is an abbreviated version!
For detailed information about lignin peroxidase, go to the full flat file. 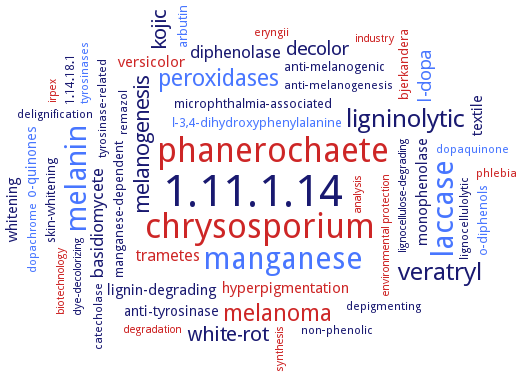 1.11 Acting on a peroxide as acceptor

Go to Systematic Name Search
Please wait a moment until the data is sorted. This message will disappear when the data is sorted.
1-(3,4-dimethoxyphenyl)-2-(2-methoxyphenoxy)propane-1,3-diol:hydrogen-peroxide oxidoreductase
A hemoprotein, involved in the oxidative breakdown of lignin by white-rot basidiomycete fungi. The reaction involves an initial oxidation of the heme iron by hydrogen peroxide, forming compound I (FeIV=O radical cation) at the active site. A single one-electron reduction of compound I by an electron derived from a substrate molecule yields compound II (FeIV=O non-radical cation), followed by a second one-electron transfer that returns the enzyme to the ferric oxidation state. The electron transfer events convert the substrate molecule into a transient cation radical intermediate that fragments spontaneously. The enzyme can act on a wide range of aromatic compounds, including methoxybenzenes and nonphenolic beta-O-4 linked arylglycerol beta-aryl ethers, but cannot act directly on the lignin molecule, which is too large to fit into the active site. However larger lignin molecules can be degraded in the presence of veratryl alcohol. It has been suggested that the free radical that is formed when the enzyme acts on veratryl alcohol can diffuse into the lignified cell wall, where it oxidizes lignin and other organic substrates. In the presence of high concentration of hydrogen peroxide and lack of substrate, the enzyme forms a catalytically inactive form (compound III). This form can be rescued by interaction with two molecules of the free radical products. In the case of veratryl alcohol, such an interaction yields two molecules of veratryl aldehyde.